Composer Danny Elfman has spoken about his inspiration for the score of the new Dark Shadows movie. "Tim [Burton] had some specific ideas about the music," he explains in a press release for the forthcoming soundtrack album. "I knew that the bigger dramatic scenes would be played in a rather grand theatrical manner, but the real treat was tapping into the retro palette Tim had imagined. He wanted something that paid homage to both the original TV series and other '70s horror genres as well. For that we kept it minimal, eerie, and atmospheric with only electronics and a few solo instruments carrying the melodies." 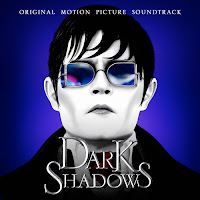 The Dark Shadows soundtrack is released on May 8 and can be ordered on CD now by clicking here. WaterTower Music have announced that they will also be releasing a second album devoted to the film. Dark Shadows: Original Motion Picture Soundtrack features some of the archive music heard in the film, along with selected pieces of the orchestral score. The CD should be available to order shortly; in the meantime, here's a tracklist:

So, there will be two DARK SHADOWS Movie CD's...'I gather. I look forward to both music Cd's release particularly the Danny Elfman Orchestra one and the Soulful/Groove one too!! I love Soul Artist Barry White and The Carpenters, to name a few Master legends Music Artists. Awesome, Art sleeve/DS's photo cover to each CD.