A glimpse of the unseen 2004 Dark Shadows pilot episode has surfaced online, as part of the demo reel of VFX artist Dave Rinder. The mute clip features an impressive computer-generated opening shot of Victoria Winters on the train to Collinsport. To view the sequence, click here; The Dark Shadows portion begins at 5:43. Thanks to site reader David Ciminello for the tip.
Posted by StuartM at 8:46 AM 2 comments:

Posted by StuartM at 4:05 AM No comments: 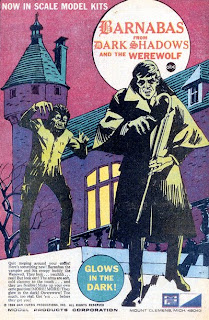 Model kit company Round 2 have announced that they are to re-issue three classic 1960s plastic Dark Shadows model kits, originally produced by MPC. The prototypes for the new editions were displayed at the recent IHobby Expo. Round 2 specialise in retro and cult-themed models, and have made many classic kits available to new audiences in recent years.
The original kits faithfully reproduced Barnabas Collins and a Werewolf, complete with glow-in-the-dark parts, and somewhat less faithfully presented young hobbyists with the Barnabas Collins Vampire Van, a dragster-style hearse for Barnabas to zip around Collinsport in. All three models will be reissued in deluxe collector's editions, available from Spring 2011.
Posted by StuartM at 1:02 PM No comments:

Posted by StuartM at 7:48 AM No comments:

News on the development of the new Dark Shadows movie has been thin on the ground recently, but Collider reports that the project is on track to begin filming in February 2011. The same website reports that actor Johnny Depp's commitment to the project may scupper plans for him to appear in the upcoming Tom Hanks film Triple Frontier.

Dark Shadows is set to star Johnny Depp as Barnabas, with Tim Burton directing a script by Seth Grahame-Smith. The film is currently slated for release in 2012.
Posted by StuartM at 7:03 AM 3 comments: 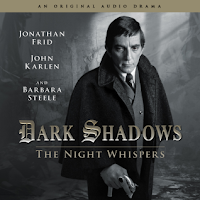 Jonathan Frid made a special return to the role of Barnabas earlier this year in The Night Whispers, an original audio drama featuring John Karlen and Barbara Steele. Courtesy of Big Finish Productions, we have two copies of the CD to give away. To be in with a chance of winning, just answer this simple question:
Which character did Jonathan Frid play on Dark Shadows other than Barnabas?
Send your answer, along with your name and postal address to webmaster@collinwood.net before October 31. For more information on Big Finish's range of Dark Shadows audio productions, click here.
Posted by StuartM at 4:07 AM No comments: