Angelique actress Lara Parker has a Dark Shadows novel out next month, and we're delighted to be able to share a preview of the book's prologue. Wolf Moon Rising is an exciting new story stretching across a century, following on from 2006's The Salem Branch. You can also find out more about the book in our exclusive author interview with Lara from last year by clicking here.

Wolf Moon Rising: Prologue
The trees draw in their shadows, a violet stain seeps over the sky, and beneath the stone walls of a hundred year old mansion, the vampire stirs. Encased in a smothering blackness that smells faintly of blood, Barnabas can feel an unfamiliar surge of strength, but where he lies there is no space, no air, only his foul breath, and demon memories crawling beneath his eyelids like maggots. Panicked, he gasps to breathe, claws above his head. His fingernails rip his silken shroud, and wooden splinters dig into the quick.


Then, in the midst of his struggling, a wave of sorrow washes over him and he lies back in his coffin with voices humming in his brain. Once again, he has died forever. Had he been royalty in the Elizabethan age, an effigy would have been carved to adorn his tomb. He is that figure of veined and polished marble, hands fixed, face motionless, and buried within, a scarred and blackened soul.

High in an upstairs bedroom of the Great House, another anguished immortal paces the floor. restless and loose-limbed as a caged carnivore. Head pounding from too much brandy, Quentin lurches toward the mirror of his bureau and grimaces at his loathsome reflection. He lifts a furred hand to blot it out, and a low growl rumbles in his chest.

Picture of the Week: Gypsy Denise 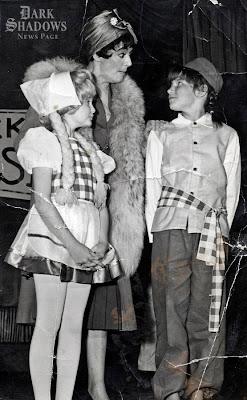 This week it's a ultra-rare photograph of a 10 year-old Denise Nickerson (Amy Jennings) in a Summer stock presentation of the Stephen Sondheim musical
Gypsy. Coincidentally, Dark Shadows' Marie Wallace (Eve) appeared as showgirl in the original Broadway production back in 1959. The picture comes courtesy of reader Dale Canter, who takes up the story:

"My neighbour allowed me to scan this photo to share it with you. Unfortunately, this photo is creased having been damaged in a drawer. Denise Nickerson is pictured at the left, circa 1967, in a summer stock presentation at Butler University in Indianapolis, Indiana. Denise played the role of Baby June. The leading lady in the production is Gisele MacKenzie, in the centre, as Gypsy Rose Lee. The girl at the right is my neighbour, Nancy Zdeněk, age 12, in the role of Baby Louise. The play was presented for a period of one week. This photo is courtesy of Nancy."

If you would like to submit an image for Picture of the Week, email webmaster@collinwood.net.
Posted by StuartM at 12:02 PM 1 comment:

Email ThisBlogThis!Share to TwitterShare to FacebookShare to Pinterest
Labels: Features, Picture of the Week 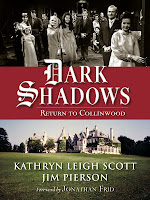 Get Well Wishes For John Karlen 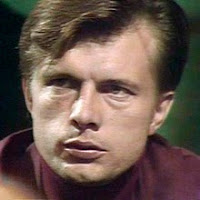 We are sorry to share the news that much-loved Dark Shadows actor John Karlen (Willie Loomis) is currently in hospital at the Studio City Rehabilitation Center in Los Angeles.

Dark Shadows fan Marie Hentz Maginity reports that: "John's son Adam says our guy could use some major cheering up, so everyone please write a letter or send a card."

Picture of the Week Special: A Family Portrait 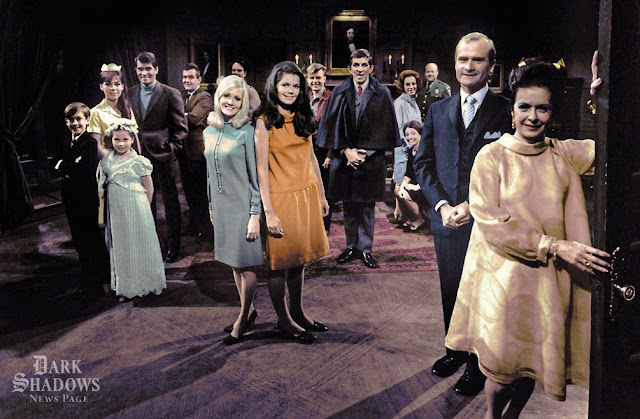 This week, as a special treat, here's a newly created version of the classic 1967 Dark Shadows cast photograph, presented in colour for the first time. I work as a graphic designer and digital illustrator, and have wanted to have a go at doing this for ages. I love this shoot and experimented with it a while back, unpicking the heavy fish-eye distortion on original. That tweaked frame was eventually used on the cover of the Return to Collinwood book.

In common with most other soaps of the era, formal photo sessions for Dark Shadows were few and far between. During the five years of production, only two group photographs are thought to have been taken – this one in 1967, and a second the following year. Shot in June 1967, during the week of episodes that followed Elizabeth's shocking wedding day confession, the production team succeeded in gathering almost the entire cast – David Ford (Sam Evans) and Joel Crothers (Joe Haskell) were the only regulars absent.

Shot to mark the first anniversary of Dark Shadows, amazingly the pictures remained unseen for over 30 years, languishing in ABC-TV's photo archives until they were uncovered in 1998. Since then, this shoot has become one of the most widely-seen from Dark Shadows, with Tim Burton even creating a version of his own to promote the recent feature film. A few other pictures taken on the same day were published at the time, including a shot of Barnabas looking menacingly over Elizabeth's shoulder and Barnabas alone peering through cobwebs in the Collinwood basement with his arms outstretched.

If you would like to submit an image for Picture of the Week, email webmaster@collinwood.net.
Posted by StuartM at 6:02 AM 8 comments: