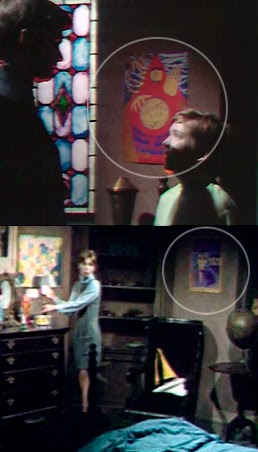 Reader Alastair Baker has written in to shed some light on the distinctive poster art seen in David Collins' bedroom on Dark Shadows in early 1969: "I finally figured out the two posters on David's wall," says Alastair, "They've been driving me mad for months. They are from the Fillmore Auditorium in late 1967. The one by his bed is from August 22-27 featuring the Paul Butterfield Blues Band, Cream and South Side Sound System. The second on a far wall is from August 29–September 3 1967, featuring Cream and Electric Flag."

During the mid 1960s, San Francisco's Fillmore Auditorium was a hub for counterculture and psychedelic music, playing host to Jimi Hendrix and The Doors, amongst others. "For a show not renowned for cultural referencing, aside from women's fashion trends, this was a surprise," says Alastair. "Do you know how they got on set? Did an actor or a tech visit San Fran on holiday and check out these gigs and decide to update David's room?"

Who knows, but it's a rare example of contemporary culture making it across the threshold of Collinwood. Here are the original posters in all their retro glory. Click on the images below for a larger view. 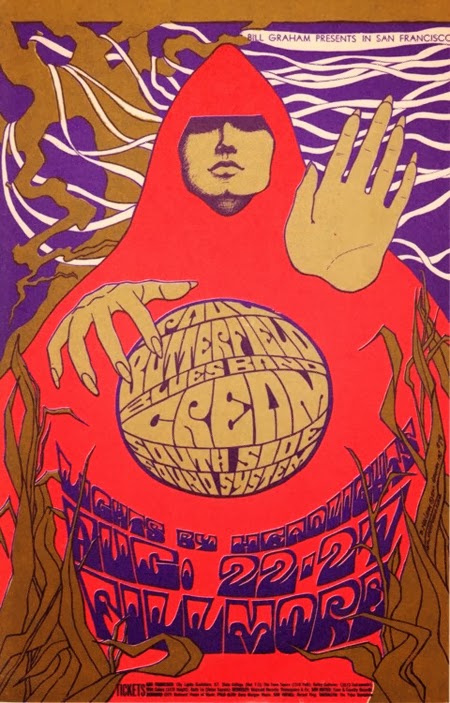 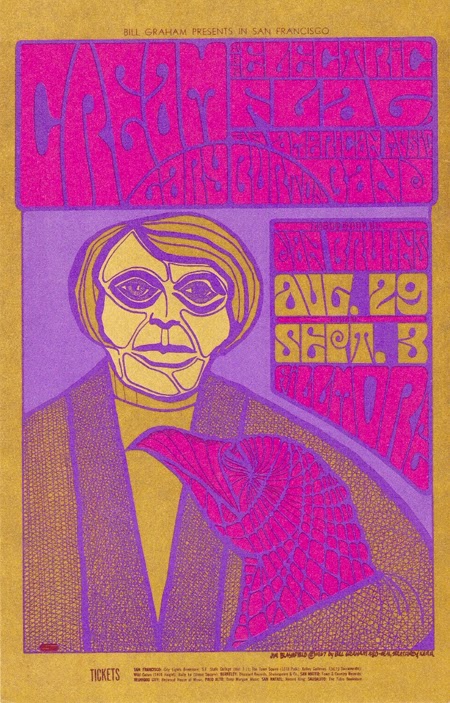 Activities begin on Saturday, June 28 from 12.00- 9.00pm at the historic Lyndhurst Estate, which served as Collinwood in the films House of Dark Shadows and Night of Dark Shadows. David Selby (Quentin Collins) will be making his first return to the property since shooting the latter film over four decades ago and will perform a special music and dramatic tribute to Dark Shadows and its fans. Joining David will be James Storm (Gerard Stiles), Lara Parker (Angelique), Kathryn Leigh Scott (Maggie Evans), Nancy Barrett (Carolyn Stoddard) and, health-permitting, John Karlen (Willie Loomis). Other guests will be announced in due course.

In addition to guest talks and high-definition screenings of both classic Dark Shadows movies, there will also be the premiere of Collinwood at the Cinema – Behind The Scenes, a new video featuring unseen material, and other surprises. These activities will be held in the Lyndhurst stable complex and tented courtyard, all with air conditioning. Additionally, each attendee may tour the interior of the historic Lyndhurst mansion, which featured prominently in both classic Dark Shadows movies. More information on Lyndhurst, click here.


On Sunday, June 29, day two of the Festival Weekend will move a few hundred yards down the street to the DoubleTree Tarrytown Hotel for the Dark Shadows Celebrity Luncheon from 11.30am-5.00pm. Each attendee will enjoy a three-course meal and receive a Dark Shadows gift bag. After lunch, actors will be signing autographs, and there will be a special stage performance from Kathryn Leigh Scott, Lara Parker and Marie Wallace (Eve).

The Tarrytown DoubleTree Hotel is the host venue for the weekend, located at 455 South Broadway, Tarrytown, NY 10591. A special Dark Shadows Festival sleeping reduced room rate of $149.00, plus tax, is available by calling 914-631-5700 and quoting the group discount code "DSF". The same code may also be used to receive the discount rate when booking online at the Doubletree Tarrytown Hotel website. Reduced rate rooms are limited and fans are encouraged to make reservations as soon as possible.

Festival membership rates and other information will be available soon at the Dark Shadows Festival website. You can also receive an advance postal mailing for the event by sending a self-addressed, stamped envelope to: Dark Shadows, P.O. Box 92, Maplewood, NJ 07040
Posted by StuartM at 1:45 PM 10 comments:

MPI Home Video have just mailed out a Dark Shadows merchandise bulletin, showcasing their latest products and promotions. New products include a Barnabas Collins tote bag, a ballpoint pen and a branded water bottle. Click on the images below for a larger view.

Additionally, MPI have teamed up with Amazon to offer their Dark Shadows: The Complete Original Series DVD box set at a new low price of $289.99, a saving of 52% from the original retail price. The 131-disc collection includes all 1,225 classic episodes plus bonus features in a coffin-shaped presentation case. To order the set, while stocks last, click here. 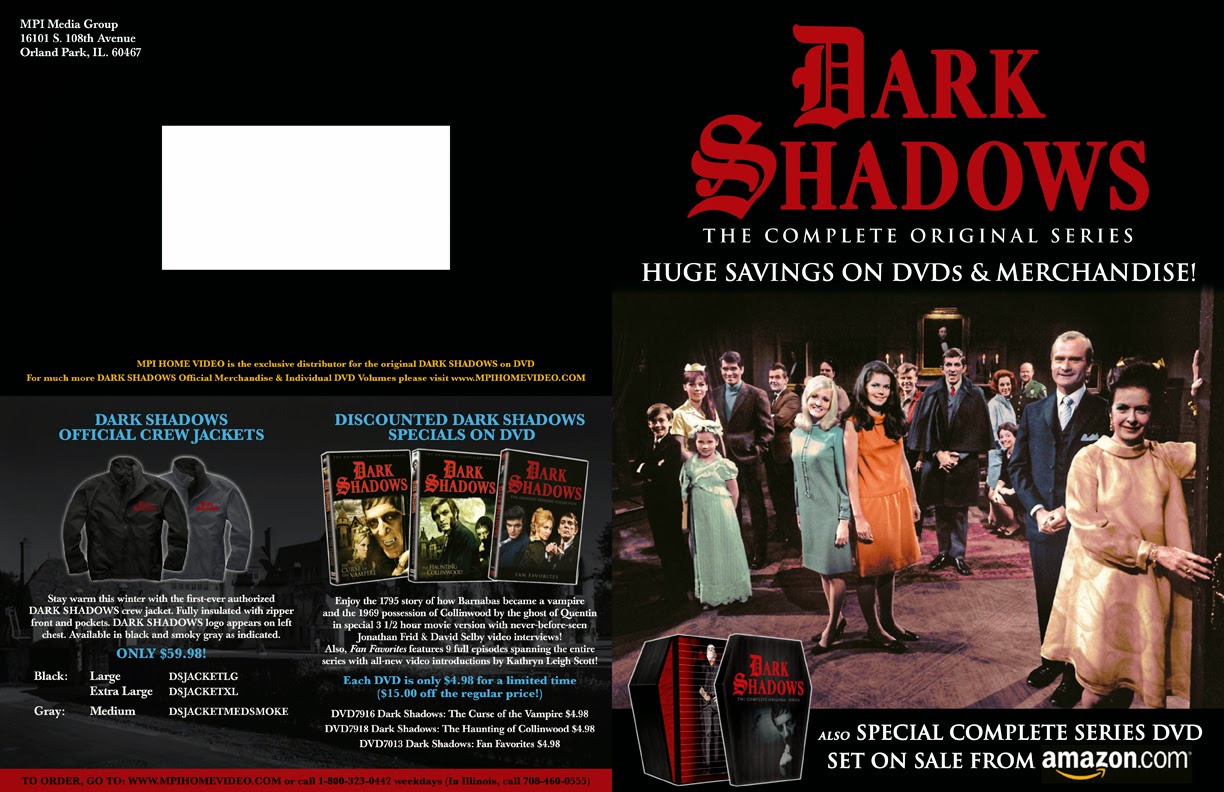 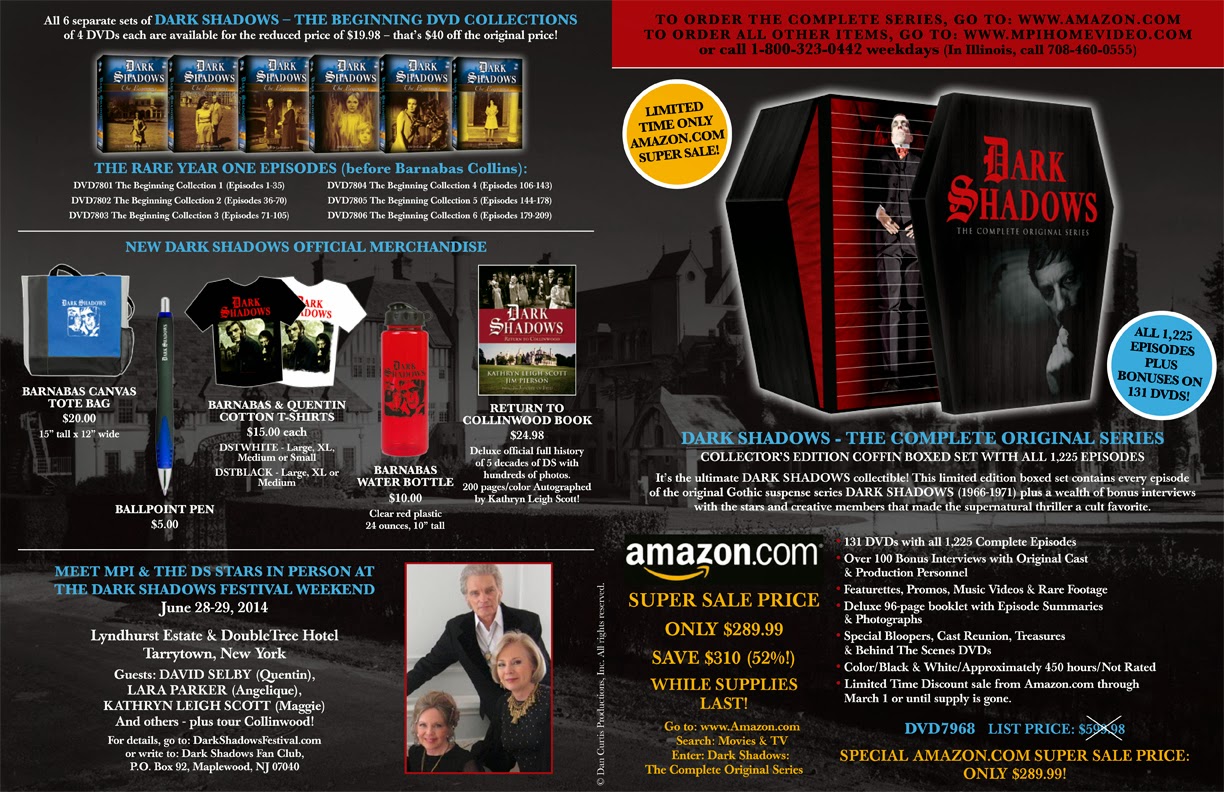