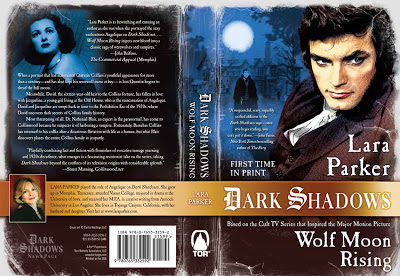 We're pleased to unveil final cover artwork for Wolf Moon Rising, the new Dark Shadows novel by Lara Parker (Angelique), which will be released in August. Click on the image for a larger view. From the publisher Tor:


When a portrait that has maintained Quentin Collins' youthful appearance for than a century – and has also kept his werewolf curse at bay – is lost, Quentin begins to dread the full moon.

Meanwhile, David, the sixteen-year-old heir to the Collins fortune, has fallen in love with Jacqueline, a young girl living at the Old House, who is the reincarnation of Angelique. David and Jacqueline are swept back in time to the Prohibition Era of the 1920s, where David uncovers dark secrets of Collins family history.

Most threatening of all, Dr. Nathaniel Blair, an expert in the paranormal, has come to Collinwood because he suspects it of harbouring a vampire. Fortunately, Barnabas Collins has returned to his coffin after a disastrous flirtation with life as a human, but what Blair discovers places the entire Collins family in jeopardy.

Wolf Moon Rising can be pre-ordered at a discount price by clicking here. To read our interview with Lara Parker about the book, click here.
Posted by StuartM at 6:26 AM 2 comments:

Picture of the Week: Dan Gets Derailed 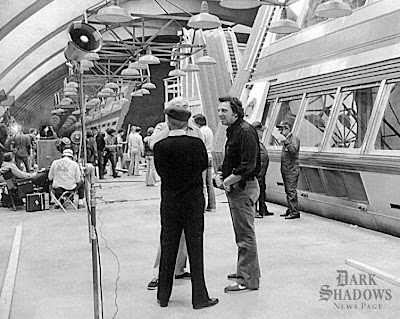 This week, it's a candid 1978 snapshot of Dark Shadows creator Dan Curtis on the set of NBC's costly failure Supertrain. Conceived as a rival to The Love Boat, the weekly show featured mystery and anthology-style drama on a futuristic luxury train, which came complete with its own gymnasium and disco. For its brief run it was the most expensive show on American television.

Before long, low ratings and backstage creative differences saw Dan Curtis abruptly leave the project to make way for a doomed mid-season revamp. Even before his departure, the cracks were beginning to show. "Put the train on with no scripts and no actors and see how long it lasts," he grumbled about NBC's decision to promote the train as the star of the show. "The train is terrific, but it's only the ambience."

By February 1979, the disgruntled now ex-producer was rather less diplomatic. "It was the biggest mistake I made," he told The St. Petersburg Times. "I directed it under the most insane conditions... With the money I was dealing with and the time, I'd love to see anyone duplicate that one." Signing off, he declared: "I don't care what anybody says about it. It wasn't f**king brain surgery... but that's what they wanted. They wanted a picture like that and I gave them one."

If you would like to submit an image for Picture of the Week, email webmaster@collinwood.net.
Posted by StuartM at 8:22 AM 1 comment: