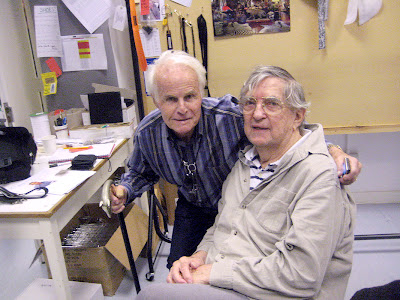 Last week we reported the sad news that Richard D. Zanuck, the veteran producer who oversaw the recent Dark Shadows movie, died suddenly on Friday. Friends and colleagues across the industry have been quick to pay tribute, including those from Dark Shadows. Original series actress Kathryn Leigh Scott (Maggie Evans) shares a candid snapshot of Richard and Jonathan Frid (Barnabas Collins) taken at Pinewood Studios last summer, when she and Jonathan joined co-stars David Selby (Quentin Collins) and Lara Parker (Angelique) to film a cameo scene for the production.


"I am so sad to hear of Richard Zanuck's passing," Kathryn. "I've long admired him and the wonderful films he produced, but didn't meet him until Jonathan, David, Lara and I arrived at Pinewood to film our cameos for Dark Shadows. He was the first to greet us… and he was so warm and welcoming. We later exchanged a few emails regarding Return to Collinwood, and again he couldn't have been more gracious and encouraging. He responded immediately and his generous support made all the difference. He was so kind and caring, reaching out and including us in what would be the final film for both Mr. Frid and Mr. Zanuck."

"I'm in shock and heartbroken at the news of Richard Zanuck's passing," director Tim Burton said in a statement to The Hollywood Reporter. "He was like family to me – a mentor, friend and father figure. Richard was a completely unique and amazing individual and there will never be anyone else like him."

"Totally bummed about Richard Zanuck passing away," Jackie Earle Haley (Willie Loomis) said via Twitter. "I was lucky to hung out with him a bunch on the Dark Shadows set. He was a great guy." Screenwriter Seth Grahame-Smith posted: "I'm heartbroken, but so grateful that I got to know and work with Dick Zanuck. I loved him. I'll miss him dearly. Thoughts to his family."
Posted by StuartM at 12:11 PM 1 comment: 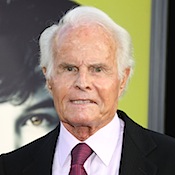 The Los Angeles Times has reported that legendary film producer Richard D. Zanuck died of a heart attack earlier today. He was 77. His long career included numerous critical and commercial hits, including Jaws, The Road to Perdition and Driving Miss Daisy, for which he won an Oscar.

Over the past decade he enjoyed a particularly rewarding collaboration with director Tim Burton, which lasted through to the recent Dark Shadows feature film, his final completed project. Our condolences go out to Richard's family and friends.
Posted by StuartM at 3:24 PM 1 comment:

Earlier this week, we reported that the two original Dark Shadows movies, House of Dark Shadows and Night of Dark Shadows are coming to DVD and Blu-Ray this October from Warner Home Entertainment. Here's an early look at the cover artwork, seen on a retail trade advertisement. Click on the image for a larger view. 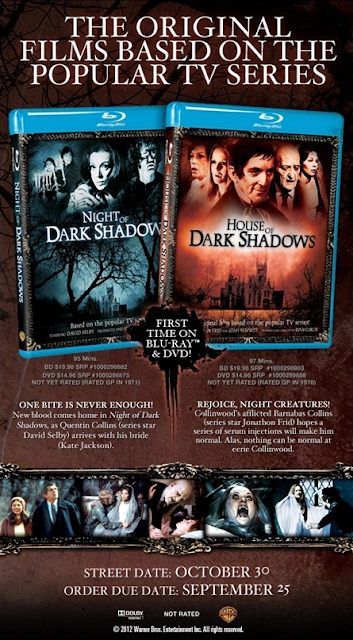 October Release For Shadows Movies on Blu-Ray and DVD 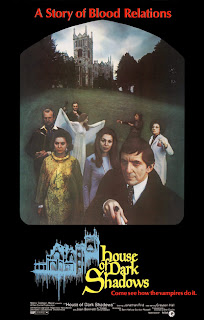 Warner Home Video has announced that all three Dark Shadows feature films will be released this October in Blu-Ray and DVD format. First up, the recent Dark Shadows movie from Tim Burton reaches stores on October 2. The release is expected to include bonus content, though this has yet to be confirmed.

October 30 sees the release of the two 1970s films produced with the original cast – House of Dark Shadows and Night of Dark Shadows – in both Blu-Ray and DVD format. It is not yet known if these titles will be available outside of the United States.

As we reported last year, it had been hoped that Night of Dark Shadows would be restored to its longer director's cut for this edition, but the studio has chosen to present the film as originally released in cinemas. Warners have confirmed that both classic movies will include a theatrical trailer as their sole bonus content. Look out for cover artwork and more information soon.

In other DVD news, the new edition of the Dark Shadows: The Complete Original Series box set is released tomorrow, collecting all 1,225 classic episodes in a coffin-shaped display case. To order it online at a discount price, click here.
Posted by StuartM at 10:13 AM 19 comments: 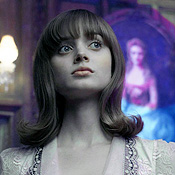