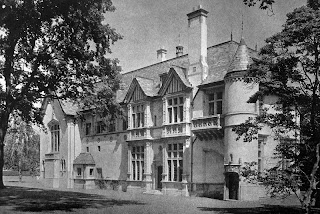 Site reader Bill Branch has written in to share some wonderful rare photographs of Seaview Terrace, the Newport, Rhode Island residence that was used for the exterior of Collinwood on Dark Shadows.
The images were first published in the May 1928 edition of The Architect showcasing the recently-completed mansion and the work of its architect, Howard Greenley. The project had taken five years of construction at a cost of over two million dollars. Dark Shadows viewers will note the interior elements of the building that designer Sy Tomashoff later included in his studio set designs, such as the great hall's distinctive chandelier and stained glass window. Other details of the house, such as the griffon sculptures on the patio and the tower's weather vane, were long gone by the time the show filmed at Newport in 1966.
Click on the thumbnails for a larger view. Courtesy of the Bill Branch collection.

Awesome! Thanks for posting.

What an amazing house.

The hallway entrance is beautiful! Thanks for posting, too!

To think these beautiful mansion was used as a boarding school. For us Dark Shadows fans it will be forever Collinwood.

I was lucky enough to be able to wander around the grounds of the estate about ten years ago, before it returned to private ownership. Unfortunately, it was a hot and sunny morning when we were there, so the mood was different than I had hoped for, but it was great to have free rein around the yard!

Thanks for posting these!

Beautiful house inside & out! I've had the wonderful pleasure of staying/sleeping in this house 6 times now on various occasions and am planning on going again this Thursay for 1 week. A real magical experience!
Carol ann

Absolutely stunning Mansion Home Estate by Architect Howard Greenley and DS's Set Designer Sy Tomashoff did wonders on the setting to the haunting on the Collin's Wood Estates. Wow, who know this will be the place where the Classic DARK SHADOWS and it's legendary Cast would call Home for neon yrs. SEAVIEW Terrace-COLLIN Wood Estate is breathtaking Mysterious. Would love to see it one day and the Old House.

It is pretty well known that the Spratt House, which was used for the exteriors of the "Old House," was burnt down in 1969. I kept looking for pictures of it until I found one of the back of the house, which has no extension, unlike the other three sides.. Within 50 fee of the house was a line of parked cars on a driveway at the Lyndhurst Museum property. That pretty much explained why the house was only photographed from the northeast corner facing southwest, and from the northwest corner facing southeast.

I love this house! Fell in love with the mansion when I was 12years old and saw it on the DARK SHADOWS TV program in 1966! I have been to visit the house several times over the years starting in 1973. I have taken several photos of the inside and outside of the house. The mansion will always remain my favorite house in the world!