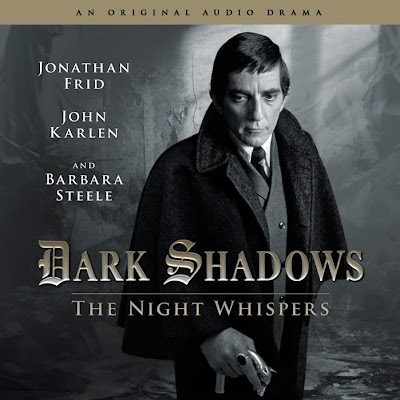 Big Finish Productions have announced that Jonathan Frid will return to the role of Barnabas in The Night Whispers, a new Dark Shadows audio drama. Jonathan recorded his lines last week in Toronto, and the CD will be available in June.
The story also stars John Karlen as Willie Loomis and Barbara Steele (1991 Julia Hoffman) making her audio drama debut as Celeste. Big Finish have posted a teaser trailer for the release on their website, which can be heard here. 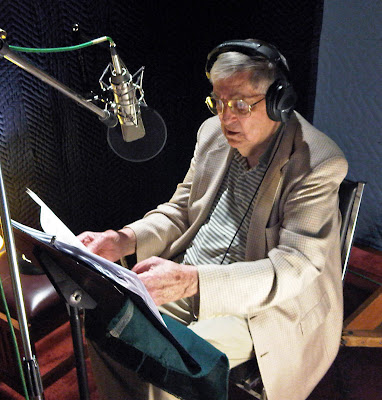 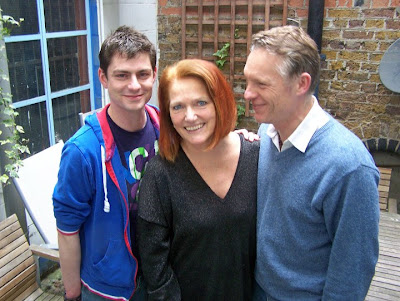 Big Finish Productions have been hard at word, as their range of Dark Shadows audio dramas gears up for a bumper crop of releases over the next few months. Out this week is Blood Dance, starring David Selby (Quentin) and Lisa Richards (Sabrina Stuart), which is now available on CD from the Big Finish website.
David also recently recorded London's Burning, which is out in June. The story features Quentin investigating cases of spontaneous human combustion in 1906, accompanied by former Doctor Who actress Louise Jameson as Rosie Faye. Louise is pictured above with the story's writer Joseph Lidster, and regular series sound designer and composer Nigel Fairs.
To keep up with the latest audio news, visit the Dark Shadows Audio Dramas Facebook Group. Big Finish have also posted a special Dark Shadows podcast, featuring writer Joseph Lidster and series producer Stuart Manning discussing the range, with story excerpts and teasers for future release. To hear it, click here.
Posted by StuartM at 5:10 PM 1 comment:

As pre-production on the Dark Shadows feature film continues, Warner Bros have announced that the film will be released in conjunction with Imax. The Hollywood Reporter has confirmed that Imax will showcase up to 20 Warner movies in the next three years, including Dark Shadows.

Imax is a high definition format, projected on much larger screens than conventional cinema, and can accommodate 3D movies. In recent years, Warners have released 10 3D titles, though it's unconfirmed that Dark Shadows will be a candidate for 3D treatment.
Posted by StuartM at 9:45 AM 1 comment:

Spectre Toys have announced that they are to produce a new range of limited edition Dark Shadows action figures. Each 8-inch scale figure will feature a detailed likeness, with authentic clothing, styled like the famed Mego action figures of the 1970s.
July sees the release of Barnabas Collins, in present day clothing with walking cane, and a 1795 Angelique figure, each limited to 3,000 pieces, available from July. There will also be a Werewolf Chris Jennings figure issued as an exclusive for July's San Diego Comic Con, which is limited to just 500.
The Barnabas and Angelique figures are available to pre-order now from Spectre's website. The company is also running a poll asking which Dark Shadows characters fans would like to be produced as figures in the future.
Posted by StuartM at 5:24 AM 1 comment:

A Visit to the Studio

As we recently reported, the old Dark Shadows studio on Manhattan's West 53rd Street has become the home of The Wendy Williams Show. Gene and David, readers of this site, paid a visit, and shared these photos.
"We walked by on a Friday when Wendy was not taping, but we were invited inside," says Gene. "We were asked not to photograph beyond the lobby; we did not have a full studio tour. I travel into Manhattan and walk the streets around this address frequently. I never got around to taking photos until last week. I just felt the urge. Many of the surrounding buildings are being torn down and replaced by high rise condos. I hope the studio remains forever!"

Amazon have recently begun offering MPI's series of officially-licensed Dark Shadows bobbleheads, caricatured sculptures of classic characters from the show. Each one is fully-painted and cast in resin. The set of five is made up of Barnabas, Angelique, Quentin, Josette and the Werewolf. To order, click on the hyperlinks.
Posted by StuartM at 9:59 AM 1 comment:

The Festival is also hosting a separate event on Friday July 16, with Jonathan Frid (Barnabas) as guest of honour. The Vista Theater in Hollywood will play host to a special matinee screening of House of Dark Shadows on the big screen, which will be followed by Jonathan putting his handprints in cement. For more information, visit the Festival website.