40 Years Ago: The Final Episode 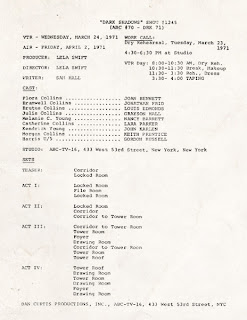 40 years ago today, the final episode of Dark Shadows aired on ABC-TV, bringing to a close 1,225 instalments and nearly five years of stories for the residents of Collinwood. The writers had just two weeks' notice that the show was being cancelled, leaving little time for reflection. With their current storyline stuck in a parallel strand of 1841, featuring none of the regular characters, Dark Shadows' swan song ended up being a rather low-key affair, drawing the story to a close with a minimum amount of fuss.

For the last moments of the script, writer Sam Hall devised a little wink to the audience, as the audience saw Melanie Collins struck down with two mysterious wounds on her neck. "If I didn't know better, I'd swear there was a vampire at Collinwood..." said Bramwell Collins, a little knowingly. Too knowingly for Jonathan Frid, apparently, who refused to do the scene, feeling that it mocked the character of Barnabas. So, at the last minute Thayer David was drafted in, having not been scheduled to appear, to say the lines as Ben Stokes. Also added for the recording was a closing voiceover, assuring viewers that the "Dark Shadows of Collinwood were but a memory of the distant past." 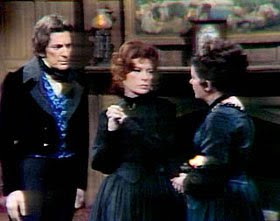 Even though it happened by fluke, somehow it seems right that Thayer David, the actor who played more characters on Dark Shadows than any other, performed its curtain call. To much of the audience, the understated ending was a disappointment, but I really like that it's a small, dignified finale. There's no great drama, no major revelations, but instead a nice breathless end-of-term style send-off, wishing some friendly faces well as they fade away.

Of course, cancellation was by no means the end for Dark Shadows. That same month, the press began to report on ABC's plans to put the show's episodes into syndication, while some of the cast assembled upstate to begin work on a new Dark Shadows feature film. And, most importantly, that original generation of viewers clung onto those memories of running home from school to watch the show. Four decades on, and Dark Shadows is still generating daily headlines as a film remake from Tim Burton enters production to massive media interest. A top-flight new cast is waiting in the wings to bring the stories and the characters to life again on a grand scale. Not a bad legacy for a faddish little soap opera made in what creator Dan Curtis once called a "rinky-dink studio". Not bad at all.

The final episode of Dark Shadows can be seen on Dark Shadows DVD Collection 26, which can be purchased by clicking here.
Posted by StuartM at 7:53 AM

This is an awesome blog. I just found it this evening. 40 years? 2 years before I was even born. I've been watching the series for the last year and it is a fantastic show. Simply one of the best I have ever seen. I definately will come back to this informative and fun blog frequently.

It's hard to believe that forty years have passed since the final airing of Dark Shadows. The writers really didn't have a chance to properly end the show with such short notice.

I had always hoped that Mr. David's character, Count Petofi would somehow find his way to 1970's Collinwood to wreck further havoc.

At least they saw fit to have Mr. David do the voice over for the last episode closing. I never quite understood why they chose to say "that the "Dark Shadows of Collinwood were but a memory of the distant past", since the show actually ended in the 1840's PT.

Dale--
I think you may finally get your wish as it looks like Count Petofi is going to wreak havoc in the lives of Carolyn Stoddard and David Collins and all their family and friends in Big Finish Audio's third season of Full Cast Audio Dramas. Go to www.bigfinish.com for more information, to check out their current Dark Shadows releases, and to wait for the release of the Full Cast Audio that I've mentioned above! ~Tracy

I remember this day, forty years ago. I was only 9 years old, and the ending was completely unexpected. What a bummer!!! (I remember hating Password afterwards!)

My mom told me that Frid and Hall had agreed to 1 more year of the show, but that they were reluctant. So that year passed. Then we heard the show was ending. Some don't want to face it, but Frid drove the final nail in the coffin by refusing to do Barnabus anymore. So we all sat in front to the t.v. and watched the final episode. We were in disbelief. Then the next Monday, we were there again. We had this dumb hope that it wasn't true, how could it be. And yes, I hated Password too.

I too was one of the kids who ran home from school to watch Dark Shadows faithfully. I would call Dan Curtis Productions and Dan Curtis' secretary told me that the show was cancelled. This was two or three months before. I remember going to my room and I cried like a baby. Dark Shadows was so special to me and to so many other kids at the time. The last 6 months of the show were really awful. The continuity was no longer there, Amadeus Collins and the lottery in the 1690's at Collinwood, huh. Collinwood was not built until the mid 1790's. TV Guide ran an article by Sam Hall with what would've happened to the characters in the present time and it was ridiculous.

Thanks Tracy, for the heads up on Count Petofi. Who will fill in for the late, great, Thayer David?

I don't know the answer to that. Toby Longworth played Prof. Stokes in one audio (and did a great job!) so maybe it will be him.

45 Years!
So happy to learn that there will be a full-feature film. I'm hoping for cameo appearances! I was in my teens watching the show in the 60s...yes ran home from the bus and burst in the door. Enjoying it once again on MPI's DVDs right now, as I never saw the 'final episode.' Can hardly wait to attend the 45 year anniversary festival celebration in August.

My only complaint with the voice-over is that it speaks of the Collins family of 1841 in parallel time. I would have wanted to hear what happened with the original Collins family in 1970-71.

There is a Decades channel showing every episode of Dark Shadows. It gets to the point, where the doctor is about to expose the vampire. Thats where it ends, and then starts all over again to the beginning. I never saw a ending episode.

Yes I also ran home and watched dark Shadow.i am now watching it on Decades.