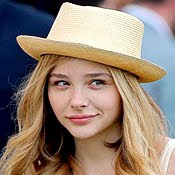 Chloe Moretz was a guest at last week's Toronto Film Festival, where she spoke once again about her role as Carolyn Stoddard in the Dark Shadows feature film. Asked about the film's tone, she offers: "It's a lot like Sleepy Hollow... you go from the Ichabod Crane character to the Headless Horseman who's comedic and yet terrifying. It straddles that fine line of camp and drama so it's like a drama horromedy thriller!"

Discussing Carolyn's character, Chloe says: "She is crazy. She is this teenager, like 15-year-old hippie who is into The Carpenters and Alice Cooper. She's super music-y and raw, like free love, you know. I did a lot of musical research, so I listened to a lot of music from the era. My character is so different from the soap opera. I can't say much because he has a really dark secret I can't tell you." Asked if Carolyn's secret was a plotline from the original series, she hints: "No, it's new. It's new to everything, so go see it. May of next year, Dark Shadows!" To read the full interview, click here.

Back on the set of Dark Shadows, filming is continuing this week as the wrap approaches, with some backstage staff already having left the production. IMDB has also reported some more cast and crew appointments. Visual effects company The Senate are working on the film's imagery. The UK-based effect house specialises in computer-generated environments, with past credits including Kick-Ass and Angels & Demons. It's also been announced that Susanna Cappellaro will be playing Naomi Collins, Barnabas' mother, in the 17th Century sequences. IMDB notes that the role is uncredited, suggesting that these scenes will form only a small part of the storyline.