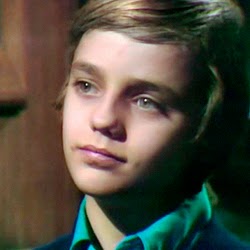 It is with sadness that we report that actor Michael Maitland passed away in a hospice on April 23 following a battle with cancer. He was 57. At the age of 13, Michael enjoyed a short but memorable stint as the Leviathan child Michael Todd on Dark Shadows.

Away from the show, he acted on Broadway in The Rothschilds and alongside Angela Landsbury in Mame. His other television work included stints on the soaps Search For Tomorrow and The Edge of Night, before his retirement from acting in the mid-1970s.

Michael's family have posted a video tribute on Youtube, featuring personal photos taken throughout Michael's life, which can be viewed in the window below. Our condolences go out to his family and friends.

Anyone that passes away from cancer goes out fighting, and I'm sure that Michael fought with everything in him. So sad to hear this. I've been a dark shadows fan for nearly 20 years, and each actor and character is dear to me. I applaud him for his role in Dark Shadows, and for the fight he put up against the disease. My heart and prayers go out to his family. He will be missed a lot. -hugs to you all-

It just makes me so sad, even if I don't remember his work on Dark Shadows, but it still makes one's heart break.

How sad to learn of the passing of Michael Maitland. He played the role of Michael,the oldest of the Leviathan children so skillfully with his arrogant and disrespectful attitude. The way he bullied David Collins and treated other family members made you hate the character while admiring his adept talent as an actor. My deepest condolences to Michael's family and friends.

Heartfelt condolences to Actor Michael Maitland's Family. His-Maitland's perfomance on the Gothic Classic DARK SHADOWS as Micheal Todd is quite rememorable. He had a very high attitude, self-centered and dangerous ambious about him when provoked "poor" Amy, David, Barnabas etc.,. had to deal with his temperment(s) yet he did have challenges when confronting Barnabas. The LEVIATHANS Story-line is very compleing/mysterious (introducing Jeb Hawkes character into DS). All of the DARK SHADOWS chiller/haunting Storylines ARE unique on the Dark Shadows Family-Cast of Major-Talents. I never seen BARNABAS being so "mean-Spirited & deadly" (due to his under a force-control by the Leviathans: intrique, storyline. "There Is No Room For Error." - Quote from DS's Barnabas

So sad! I recognized the adult Michael from other shows after seeing this tribute! Another beautiful light extinguished from this world too soon....but it burns still in another. Condolences to his family.

Michael was my friend. We corresponded when we were 13/14 for awhile, after I wrote a fan letter. He was so sweet. He wanted to call me but his mother said no. She was the under study for June Allison at the time in, "No No Nanette."

I tried to find a way to contact him as an adult to find out how he was doing. I lived in Terre Haute, IN at the time.

I was just on YOUTUBE and saw Michael Leviathan and I remember this character when I was a kid on DARK SHADOWS. He was a year older than me ad quite the actor.
My mother and sister died this year also from cancer, what a horrible thing this cancer is!!!
Another part of my childhood is gone. I will pray and think of Michael as I will my other and sister. God Bless Us All!!!
Big Fan , Jay

I used to go to grade school w/Michael..
In NYC at PS69..grades 1 thru 6..where the Hilton Hotel is now..and La Salle jr High on 48th st..midtown..grades 7 thru 9..
We used to hang out a bunch..last time I saw him was probably in 1971..we were all playing baseball in Central Park..shortly after I moved out of the city for good..and never saw him again..didn't know what became of him..
But..
He was a swell kid..I remember he was always very proud of his sister..
And he was always getting me into trouble in school..he definitely was a rebel..definitely..and pushing the limits..all the time..
One day he told me after class...that he was an actor..and on TV..but I thought he was bs-ing me..and didn't find out later on..that he had real street cred there..
Hope he was happy in life..
RIP Michael

Michael was a free-spirit, seriously charming, when we were in eighth grade together. Being around him was like walking on air.