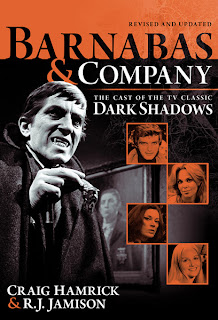 As we reported yesterday, Barnabas & Company: The Cast of the TV Classic Dark Shadows has just been updated and reprinted, re-affirming the book's place as the definitive guide to the show's actors. We caught up with co-author R.J. Jamison to get the lowdown on the new edition...

The first edition of Barnabas & Company was written by the much-missed Craig Hamick. How did you come into contact with him?
Craig and I were friends in the final year of his life. As two kids from Kansas who made it to the big city, we had a natural camaraderie, and in working on his final book, I feel a special ongoing kinship with him. He very generously helped me with my Grayson Hall biography, offering bits of advice and helping with the photo sections. I recall when he cropped out an entire person – a friend of Grayson's – from a photo then laid another photo on top of her. I said with some trepidation: "Can we do that?" He winked and said: "Hey it’s about Grayson not her friend." Then I knew we 'got' one another. At his memorial service, I recalled that it was Craig who, almost more than anyone else, helped me realize my dream of being a writer.

Craig researched Dark Shadows extensively... How do you think he viewed the show?
Craig’s perspective on Dark Shadows was that it was a lovely, odd oasis to hang out in. He didn't take it too seriously, but he did feel the actors had broader, richer careers than often was acknowledged and he wanted to expand that view. Craig’s partner, Joe Salvatore, took some time in deciding how to move forward with Craig’s uncompleted projects after his death. In that time, Joe and I have become good friends. When he was ready to move forward with the book, he asked if I’d help. I easily agreed, perhaps naively – it was a big job!


How complete was the book when you began work?
The final manuscript had lots of notes and blocks of yellow in it, with indications like 'TK' – meaning, to come. There were also many unaccredited quotes. So there were big chunks that needed to be rewritten and researched. Because Craig had known most of the actors for many years, he had insider stories, but I didn't know who the unnamed speakers were. So I had to do a lot of fact vetting. Craig had poured enormous energy into expanding the profiles from his 2003 book – I refined and added updated information as I think he would have liked.

How different is the new book to the first edition?
The first edition was 257 pages. The new one is 572! I’m not kidding – isn’t that funny, the same numbers rearranged? There's new information on almost all of the actors. We conducted interviews with Humbert Allen Astredo (Nicholas Blair), Addison Powell (Dr. Lang) and the families of Thayer David’s (Professor Stokes) and Peter Turgeon (Dr. Woodard).

Those interviews are quite a coup...
I’m not sure how the interview with Humbert came about but it's a fun slice of the book. Humbert first ran his own theatre in the Los Angeles area. After coming East, he had enough chutzpah to just call the Public Theatre without an agent and tell them all the Shakespeare he'd done. Humbert was hired within weeks and started appearing at Central Park's Delacorte Theatre, doing Shakespeare. That just wasn't done, then or now. He also had an anecdote about the late Princess of Wales, whom he met while on tour with Elizabeth Taylor in The Little Foxes.

And voices like Addison Powell, who has since died, must be particularly valuable?
By happenstance, Craig met a friend of Addison's online in 2005-06. Addison had moved to Maine after the death of his wife. I guess the Dark Shadows-universe didn’t know where he'd gone. So there's a lovely piece on him.

Small world... So, any other chance encounters?
Yes, I also happened to find myself only two degrees from another Dark Shadows actor! One day, one of my best friends, called me to say "Grayson killed my cousin Bunny." "What!?” I replied. My friend had been looking into Dark Shadows because her cousin, Peter Turgeon, had appeared on the show. What was more to surprising to me was that the third Dr. Woodard's family nickname was 'Bunny'. I mean... really? I was able to talk with his daughter and get some interesting stories about him.

You wrote a biography of Grayson Hall several years ago – Grayson Hall: A Hard Act To Follow. Did working on this book uncover any new facts about her?
Oh, I wish it had. After the book was published, I learned of a few more stage credits which I put on the website. There's a film voice over that she had her name removed from that's now available on YouTube, with her unmistakable voice over a soft-core porn scene in a garden. I bet she's mortified still. A cousin did write to me, correcting some stuff about her family tree, but there have been no more earthshaking revelations! Chronicling the story of her first husband, her failed academic career, and her penchant for steroids was enough!


Summing up, what do you think sets this book apart from the others written about Dark Shadows?
We set the record straight on many things. For example, there have long been rumours about Thayer David, his stage name and strained familial relationships. These, according to his family, are incorrect and have been upsetting to Thayer's sister, who is still alive. Most of all, though, I think readers will be astounded at how often these actors' paths crossed – working in theatre, television and radio. It was a community – a big, fun, community of wildly eccentric people who were trying to make a living and, in the case of Dark Shadows, having a hell of a lot of fun doing that.

And finally, tell us one surprising thing that readers will discover...
There was one actor on the show whom many others wanted to do nothing but complain about!

The new edition of Barnabas & Company can be ordered now by clicking here.
Posted by StuartM at 12:46 PM

Yes, the uploads are happening this coming week.

Although I never met him in person, Craig gave me a lot of great advice on getting my book published as well. He had no reason to help me, but he did. I think it was just because he was a very nice person. During our email conversations, I never had any idea how ill he was. Our emails naturally slowed down, and I had been meaning to get back to him when I read that he had passed on. I was rather sad. I look forward to reading the updated edition. Thanks RJ!

What I loved about the first edition was all the intimate backstage gossip. BTW, I think we all know the identity of the despised actor other cast members couldn't stand despite being a favorite of Dan Curtis (which explains why he kept getting parts on the show!) Let's just say that the actor's ex-wife is an absolute angel........

Just a correction, the book is 552 pages.

Wow, 527 pages of DARK SHADOWS Cast & Crew indepth Bio and behind the scenes. Thank you very much Authors Craig Hamric & RJ Jamison. It sounds and definately looks a treasure. I brought the DS's Return to Collin Wood...'that's another pearl find. Look forward to purchasing BARNABAS and Company, great cover!