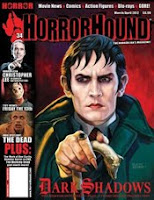 The Dark Shadows movie makes the cover of the new March/April issue of horror journal HorrorHound. The magazine features an interview with director Tim Burton, discussing the film in depth.
"The reason I liked Dark Shadows was that it was a weird family story. It just happened to have supernatural qualities to it," he reveals. Responding to reports that the film will feature comic elements, Burton says: "It's news to me... I always start things with the most serious of intentions. I sometimes find humour in things that aren't funny and vice versa."
On Johnny Depp's look for vampire Barnabas Collins, Burton explains that: "We wound up with a nod to [original actor] Jonathan Frid's Barnabas," and explains the inspiration for the character's elongated fingernails. "Because of the sensitive nature of the character, I liked the idea of his fingernails being long, a bit more tactile."
As post production nears completion, Burton also says Dark Shadows will use special effects sparingly. "I want to rely on the characters... We were trying to keep it as human and personal as possible. Every effect should not seem like an effect."
The issue is available in stores now and also includes an overview of the original Dark Shadows storylines and a look back at the career of the show's creator Dan Curtis.
Posted by StuartM at 10:33 AM

I have been a fan of Dark Shadows since my Childhood.
When I heard that Tim Burton was making this Movie I have been looking forward to the release date. However I haven't seen any advertizing in my area. So I have a question is the New Dark Shadows Going To Be In Theaters or is it going straight to DVD?

The Dark Shadows movie is in cinemas from May 11.

And IMAX theaters as well!

Stuart, Is the Horror Hound mag with the Depp cover a UK version? I have been to the HH site and done a couple of searches and haven't seen this cover anywhere except here.

No, it's a US publication, though the distribution does seem to be a bit patchy. Happy hunting!